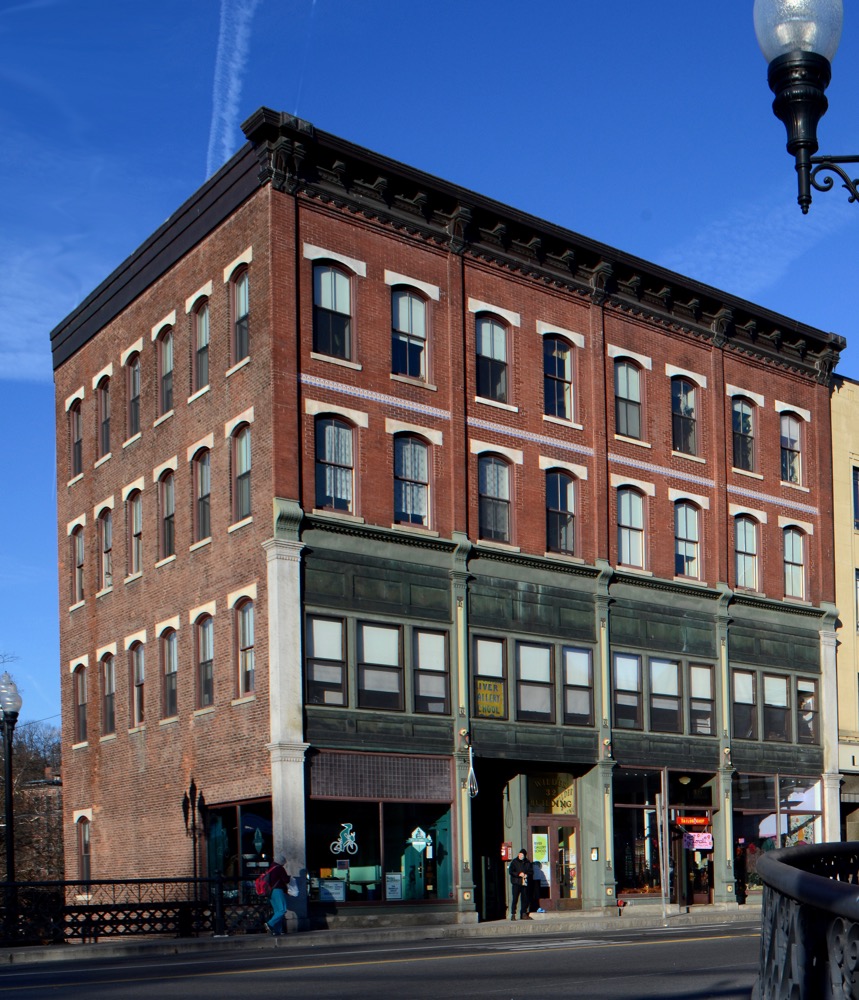 “Vermont communities are very fortunate to have many dedicated individuals and organizations that are passionate about saving and reusing their historic places. These historic sites have much to do with defining the character of communities and Vermont as a whole,” said Paul Bruhn, the Preservation Trust of Vermont’s Executive Director. “And we’re especially lucky to have such a wonderful collection of award winners this year.”

The Preservation Trust of Vermont supports efforts by nonprofit organizations and communities to save and use historic places that help to define the character of Vermont. It is based in Burlington.

In December 2004, a night fire ravaged one of the great historic buildings in downtown Brattleboro. It was a spectacular fire and though the interior was severely destroyed, no one lost their life.

Within hours the Preservation Trust organized a charette to see what, if anything, might be done to save and reuse the Wilder Block. Representatives from the Agency of Commerce and Community Development, Division for Historic Preservation, nonprofit housing organizations, members of the for-profit development community, and the Preservation Trust traveled to Brattleboro. In the end it was clear that there was only one hope to save the Wilder Block and put it back into a good use. Understanding that that they were the only ones do it, the Brattleboro Area Community Land Trust and Housing Vermont stuck their collective neck out and pulled off a remarkable transformation.

We are in awe of their willingness to take on such a difficult challenge. Completed in December 2006, the $2.9 million rehabilitation of the historic Wilder Block created eight affordable apartments, office uses, and retail…an amazing story of courage, financial commitment, passion, and commitment to quality and detail.

Although still functioning as an Amtrak rail station, the building underwent a number of changes: removal of the tower, the baggage building, canopy, and a significant portion of its architectural detailing, ornamentation and charm. Because of its deteriorated condition, trees were planted in front of the building at the Town Green to hide it from view.

In 1997, Revitalizing Waterbury, a local non-profit organization, started a long community journey to rescue the building.

With the help of an Agency of Transportation Enhancement Grant, Historic Preservation Grants, Great American Stations Foundation grant, local fundraising, a grant from the Green Mountain Coffee Roasters, and lots of volunteer hours, the station was beautifully restored and today continues to serve as an Amtrak station, an inter-modal transportation center, visitors center, and Café for Green Mountain Coffee Roasters.

Once again it is a proud centerpiece for downtown Waterbury.

We’re pleased to honor the Association for its enthusiasm, contagious optimism, and inclusiveness both in reaching out to the entire Mt. Holly community, but also the State of Vermont. Receiving the award on behalf of the committee is Annette Lynch.

Ludlow Town Hall Restoration Committee
Built in 1901, the Ludlow Town Hall houses the Town and Village government and serves as a venue for cultural events, basketball games, school art exhibits, social and recreational events, and town meetings. In 2005, a committee of local citizens decided it was time to bring their aging Town Hall into the 21st century.

A comprehensive improvement plan was presented to the citizens who overwhelmingly approved a $750,000 bond that, combined with grants, transformed the upstairs auditorium into a solid performance venue with state of the art acoustics.

Vermont Humanities Council for the rehabilitation of the 1873 George Scott residence in downtown Montpelier.
In December 2004 the Vermont Humanities Council purchased the Italianate style Scott House near downtown Montpelier and transformed it into their headquarters. The project required the Council to undertake its first capital campaign, raising $680,000 for the project.

The VHC board felt strongly that, given the Council’s mission, it was appropriate to commit to preserving an historic building in the state capitol and to renovating it in a manner that demonstrated the compatibility of environmental responsibility and historic preservation. With a $50,000 challenge grant from Jan and David Blittersdorf for energy efficiency, VHC worked closely with the Division for Historic Preservation, their architect, and contractor and tightened the building, installed a more efficient furnace, including switching from steam to hot water, installed an air-to-air heat exchange for ventilation, removed most carpeting, used low VOC paints and finishes, installed high-efficiency lighting and water saving toilets.

The result is a model house that has reduced energy consumption through sustainable preservation and a new face for the Humanities Council with a headquarters adjacent to downtown Montpelier .

Jim and Lorraine Impey, for their investment of time, money, and vision in rehabilitating a number of St. Johnsbury’s historic properties
Scattered in St. Johnsbury are impeccably rehabilitated buildings that lift up the neighborhood. You may recognize some of them:

Jim and Lorraine ’s contribution to their community goes beyond good historic preservation practice. They quite literally give back to St. Johnsbury through a charitable foundation that provides support to non-profit organizations such as Catamount Arts and the Athenaeum. Their quiet generosity led community leaders to nominate the Impeys for a 2007 Preservation Award.

VHCB has significantly advanced the realization of communities and preservation of their unique resources.

In its 20 year history, VHCB has funded 8,463 units of perpetually affordable housing, conserved 418 farms with 117,081 acres, and protected 248,494 acres of natural area and recreational land.

The Board prioritizes housing that is located within community centers and within existing buildings. Examples include the Wilder Block in Brattleboro, conversion of the YWCA in Burlington to COTS housing, the Tuttle Building in the heart of downtown Rutland for affordable housing, and conversion of Fair Haven’s Marble House to assisted living housing.

VHCB’s central innovation is to reframe housing, conservation and historic preservation as a complementary—rather than competitive—public policy and community goal. VHCB has touched communities—large and small, rural and urban—across the state. It has nurtured a network of 58 housing and conservation non profit organizations across Vermont to develop high quality, well-leveraged projects that enhance Vermonts unique resources and advance its social, economic and environmental well being.

Special Recognition of Senator James Jeffords for his tireless efforts on behalf of Vermont’s Historic Places
Jim Jeffords served the State of Vermont for 16 years in the U.S. Senate. During that time, Jim gained a reputation for supporting the preservation, conservation, and interpretation of our cultural heritage and natural resources.

Senator Jeffords championed stewardship and interpretation of historic and cultural landscapes through the National Park service and worked with Senator Leahy to secure funding for the historic barn and mill complex at Vermont’s first National Park: the Marsh-Billings-Rockefeller National Historic Park . He loved history, and in 1991 convened historians and stakeholders to begin a study that culminated in the passing of the Champlain Valley National Heritage Partnership Act in 2006.

The purpose of the Act is “to assist the State of Vermont and New York, including units of local government and nongovernmental organization in the States, in preserving, protecting, and interpreting those resources for the benefit of the people of the United States.”

It is with great enthusiasm that today we honor Senator Jeffords with a 2007 Preservation Award. His dogged determination in getting the Champlain Valley National Heritage Partnership Act passed will leave a legacy of preservation in Vermont.