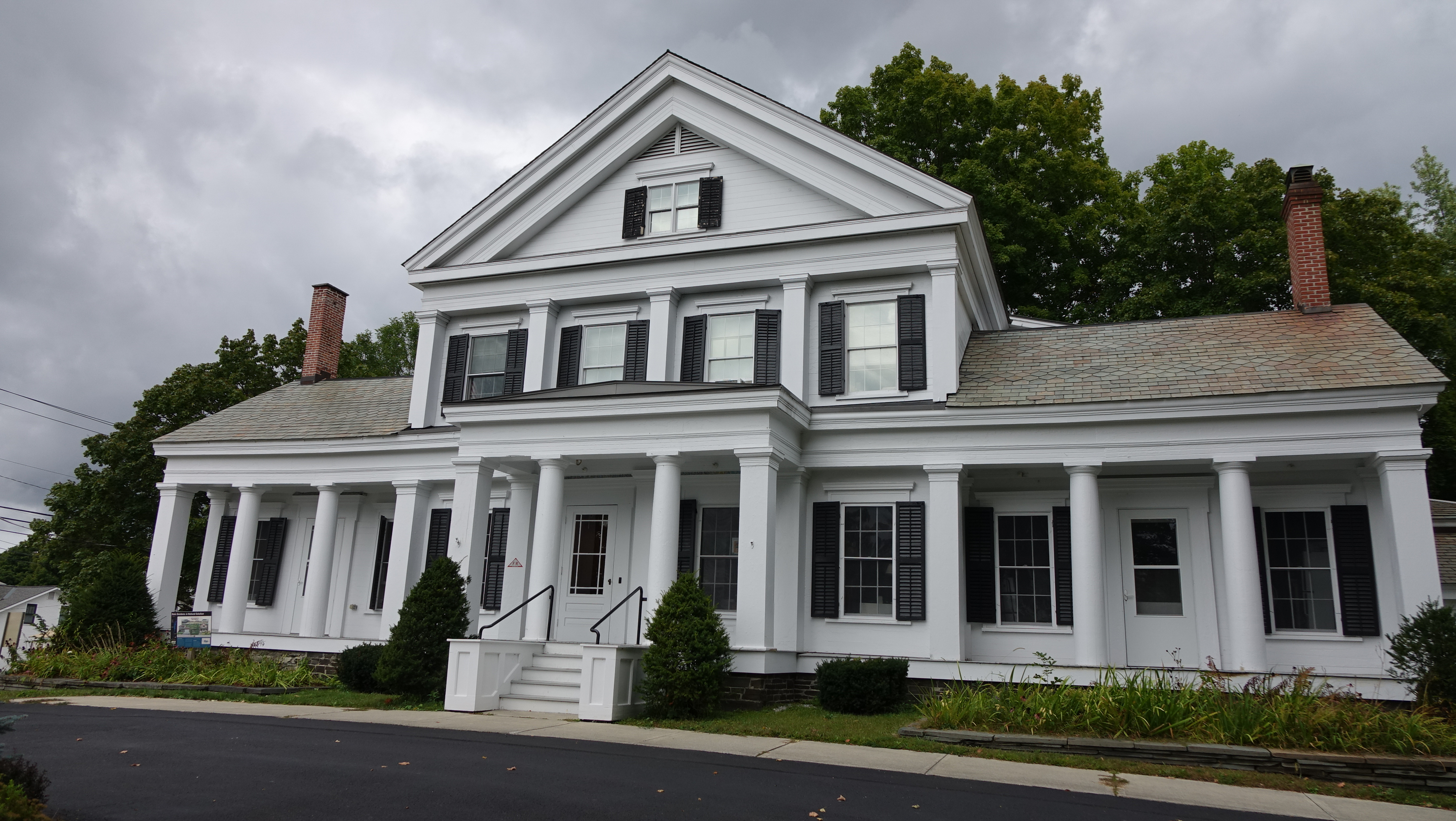 Since 1982, The Preservation Trust of Vermont has recognized outstanding contributions in the field of historic preservation. Awards are presented to the individuals and organizations who have made special contributions in preserving Vermont’s historic architecture. The 2005 Award Winners are:

Brattleboro Town Manager, Brattleboro Fire Chief and his department, and the Brattleboro Area Community Land Trust
In combination, these folks all saved the historic Wilder Block in Downtown Brattleboro. Fire ravaged the four story building next to the Latchis Hotel and Theater. Firefighters worked much of the night to control the fire and make sure that the Latchis would not be harmed. The Town Manager (Jerry Remillard) and the Fire Chief (David Emery) decided against the immediate demolition of the remains and agreed to provide the opportunity to save the Wilder Block from destruction. Connie Snow and the Brattleboro Area Community Land Trust agreed to take on the enormous task of rehabilitating the building for a new and productive use. Senator James Jeffords, Governor Jim Douglas, and the Vermont Housing and Conservation Board provided the financial resources to make the project happen.

George Ewins
George Ewins, a native of West Berkshire, has worked tirelessly in recent years toward revitalization of this village on the Canadian border. George worked with students in the Historic Preservation program at UVM to collect the elements of a community vision from local residents which resulted in the formation of committees for pursuing the community’s revitalization goals. George bought and exquisitely rehabilitated the historic Phoenix House, an old tavern and community gathering place that had fallen into disrepair. He has now begun clean-up of the historic village green.

Renaissance of Downtown Brandon
Over the last five years, Downtown Brandon has undergone a stunning renaissance. It’s a process that involved many steps and is on-going. The catalyst for change was the restoration of the Baptist Church’s steeple. The work of a small group of volunteers provided that “success” was possible. The work of the Brandon Artist Guild and artist Warren Kimble injected new life and joy into the community with the famous painted pigs, bird houses (“Brandon is for the Birds”), and rocking chairs. Citizens build a park overlooking the falls of the Neshobe River, and are working to rehabilitate the Town Hall as a place for community activities and the performing arts. Developers retailers have invested in the downtown and built a lively downtown that still provides the community’s basic needs. In 2004, Yankee Magazine selected Brandon as one of New England’s “Hidden Jewels.”

East Burke Congregational Church
Members of the East Burke Congregational Church had been working for four years to raise funds to repair their building and install a lift. Nearing the end of the multi-year project, they hired Michael Kuk of Custom Building and Design to repair the water-stained sanctuary ceiling, but when Mike and his crew removed the damaged panels, they discovered a long lost decorative plaster ceiling complete with a medallion of clouds. Mike stopped work, called the project architect, Rob Brown, who immediately brought in plaster and paint specialist, Leonard Spencer. With that, the congregation decided their only choice was to take on a full restoration of the ceiling, adding over $30,000 to the budget. This is a project where EVERYONE did exactly the right thing!

The Painter Theater Project of the Vermont Museum and Gallery Alliance and Christine Hadsel, Project Director
The Painted Theater Project began in 1998 with a survey to find and assess the condition of Vermont’s collection of painted curtains. At the time, there was thought to be less than a dozen of these treasures…now, over 150 have been found. With volunteers and professional conservators 76 of the collection have been cleaned, mended, and judiciously in-painted. Most have been reinstalled on their home stages in town halls, grange halls, community theaters, and opera houses.

Stonebridge Inn, Town of Poultney
As we all know way to well, patience and tenacity are often two of the most ingredients in a preservation project. The Stonebridge Inn is a perfect example. A fire in 1996 nearly destroyed one of Poultney’s most important landmarks. A private restoration effort followed, but the task proved to be too great. The Town of Poultney agreed to step in and began the process of raising over $800,000 to rehabilitate the building. It’s now complete and is home to a variety of community service organizations. Poultney’s elected leadership and especially Town Manager Jonas Rosenthal deserve enormous credit for their patience and tenacity.

Gerrit Kouwenhoven
Gerrit Kouwenhoven served as Executive Director of Hildene for many years and developed one of Vermont’s most successful historic sites. Volunteer support and commitment was central to the special place that Gerrit helped to build. More importantly, we believe, Gerrit served as Chair of the Preservation Trust’s Board for 10 years. He lead and served at the time of the organization’s great spurt of growth and service to Vermont communities. It would be impossible to overstate the importance of his gentle guidance, leadership (it’s not always easy to manage Paul!), and eloquent appreciation of the work of the Preservation Trust’s Board Members and staff.