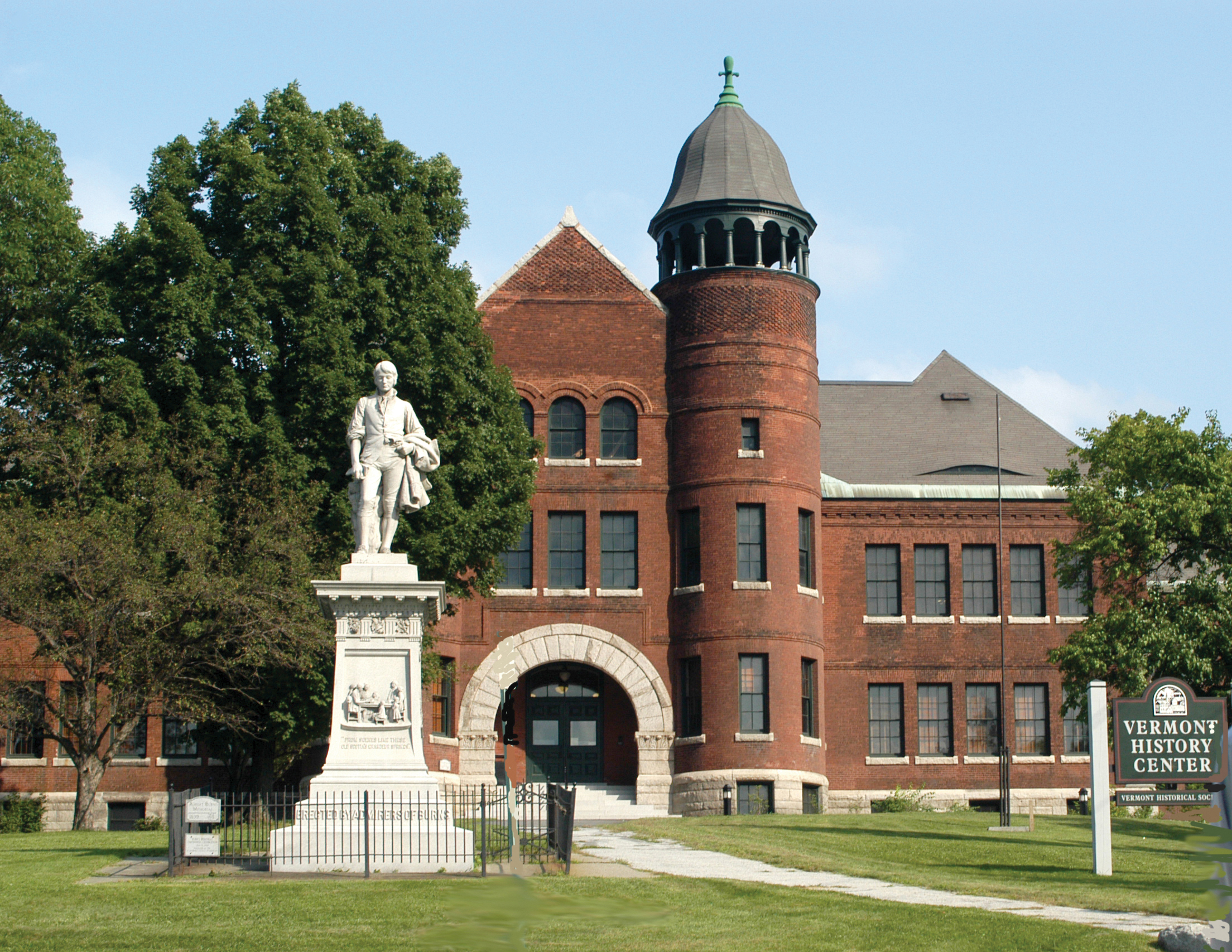 The Preservation Trust of Vermont is pleased to announce the 2003 recipients of the biennial Preservation Awards. Since 1982, The Preservation Trust of Vermont has recognized outstanding contributions in the field of historic preservation. Awards are presented to the individuals and organizations that have made special contributions in preserving Vermont’s historic architecture. Examples include the preservation or adaptive use of an historic property; educational and public information materials and programs; building trades and professional training; programming at historic properties; financial support; and special encouragement and leadership in the preservation field. The 2003 awards were presented on Thursday November 6 at an awards luncheon at the Equinox Hotel in Manchester. Following are this year’s recipients:

Hiram Allen
Hiram Allen is being honored for his enormous public generosity that saved a landmark. Ben’s Mill, built in 1872 in Barnet, is one of Vermont’s very special treasures. Within it are a woodworking shop, blacksmith’s forge, cider mill, and wheelwright. The mill is remarkable in that everything–belts, shaft, equipment, tools–survived and continued to be in used until about fifteen years ago when then-owner, Ben Thresher, died. The doors to the mill were simply shut with the contents left until 1999, when Hiram bought the mill for $100,000 and went to work to bring it back to life. In 2002, he donated the property to the recently formed nonprofit, the Ben’s Mill Trust, Ltd. Hiram sits on the Board and is the #1 volunteer working with the community to reopen Ben’s Mill as an operating, water-powered mill.

Bethel Lympus Church
It was August 1999 and the trustees of Bethel-Lympus Church were faced with a critical dilemma: either restore the church or erect a monument to recognize its past existence. Thankfully they chose the former. Trustees George Carr and Bill Pollock took the lead…writing articles, sending fundraising letters, calling community members and the congregation, and visiting businesses. Impressively, they had the participation of 60 families and businesses to help pay for repairs; plus grants from the Division for Historic Preservation and Preservation Trust of Vermont. On July 20, the restoration was complete and the church rededicated. Today, this tiny pristine chapel is very much the same as when it was completed in 1837: no electricity, no plumbing, no telephone, or running water…and the center of the Lympus community.

Westminster Selectboard
The Westminster Selectboard is being honored with a 2003 Preservation Award for their leadership and commitment to rehabilitate the Westminster Town Hall. Built in 1889-1890, the town hall houses municipal offices and an upstairs auditorium. Since 1999 the Selectboard has worked with a committee of local citizens to develop a plan, secure funding, and oversee repairs to the building, including painting the building in its original Victorian color scheme. Work on the project continues, but the Selectboard’s leadership on this project ensures that the Town Hall will be a centerpiece for Westminster for another century.

Mark Foley
Mark Foley’s entrepreneurial spirit combined with a strong sense of community has led him to invest in and rehabilitate many older buildings in downtown Rutland including the Service Building…Vermont’s only Art Deco Skyscraper, the Opera House, the Louras Building, Chittenden Bank, Howard Bank and others. He is dedicated and a passionate leader-some say a silent warrior-in the effort to maintain and strengthen the vitality of downtown Rutland.

Vermont Historical Society
The Vermont Historical Society is being honored for the rehabilitation of Barre’s Spaulding Graded School for use as the Vermont History Center. A few years ago Spaulding was empty, deteriorating and in grave danger of eventual demolition. Today St. Johnsbury architect Lambert Packard’s 1891 Richardsonian Romanesque structure is a lovingly restored, bustling, vibrant headquarters for the study, display and interpretation of Vermont’s distinctive heritage, as well as a key factor in the revitalization of Barre’s historic downtown district.

Housing Vermont and the Central Vermont Community Land Trust
The Green Mountain Seminary was built in 1869 by the Free Will Baptists of Vermont. In 1885 it was deeded to the town for use as a graded school-a use that continued until 1960. In 1988, when Central Vermont Community Land Trust began to explore rehabilitating the building for housing and for continuing use as a branch library, the seminary was in a state of severe deterioration. The Land Trust with Housing Vermont worked for over two years to obtain funding and refine plans to incorporate accessible public space. The end result is a vital and beautiful building, an elegant and affordable place to live for young families and senior citizens, with light glistening through twelve foot high windows onto hard wood floors.

Suzanne Boden
Suzanne Boden is being honored for her work to restore Longfellow House in Hyde Park. In 1893 Vermont Governor (and later U.S. Senator) Carroll Page built Longfellow House, so named because it was designed after Henry Wadsworth Longfellow’s house in Cambridge, Massachusetts. After Governor Page’s daughter died in 1929, the house was boarded up, went through a series of owners but remained unoccupied until 1970 when it was purchased and occupied by a family for several years and then sold to a religious order. The house was again abandoned in 1990 and sat empty until purchased by Suzanne Boden in 2001. Suzanne spared no expense in restoring the building and opening it as a bread-and-breakfast, appropriately named The Governor’s House.

Vermont Arts Exchange
The Vermont Arts Exchange is a community arts organization co-founded in 1994 by Matthew Perry and Patricia Pedreira. VAE’s mission is to strengthen neighborhoods and build communities through the arts. VAE has, since its beginnings, quite naturally and consistently woven the rehabilitation of historic buildings into this mission. In 1994 they converted the largely abandoned Sage Street Mill in North Bennington to an arts center for dance classes, studios, music, gallery, summer camps and after-school programs. In 1998, VAE sponsored the Vermont Arts, Housing and Preservation Project rehabilitating five historic buildings, including two firehouses in Bennington for affordable living and work space for artists. Combining entrepreneurial skills, a believer’s zeal, and the creativity of the arts, VAE helps define what historic preservation in 2003 is all about.

Lydia and John Makau
Lydia and John Makau are being honored for the painstaking restoration of the remarkable House II, located in Hardwick, Vermont. Peter Eisenman, an internationally known architect for his architectural theories, designed and built House II in the late 1060s as part of a series of ten residential buildings. Only four were actually constructed. The house is based on the geometric cube and has large expanses of glass and minimal interior walls. But the client who commissioned the house had expected a more traditional home. Neglected and in a state of decay for thirty years, House II was put on the market and eventually bought by the Makau’s, who restored it, fully respecting the integrity of the original design. This house, without doubt, is the most important building from the 1960’s in Vermont and is recognized internationally for its design concept. Without the purchase and careful restoration undertaken by Lydia and John Makau, this highly significant building would have been lost.

Emily Wadhams
Our final award, actually a bit a surprise for the recipient, is recognition of how a person of great passion, commitment, intelligence, and charm can accomplish much. Emily Wadhams served us as Vermont’s State Historic Preservation Officer for five years…times when it was enormously important to have a leader who was able to sort out common sense solutions and was always willing to stand up for all of our historic resources…even places like the Jones & Lamson plant in Springfield- a place rejected by many in the community, but a place that played a most important role in winning World War II and a place where, today, Springfield’s new economy could thrive.