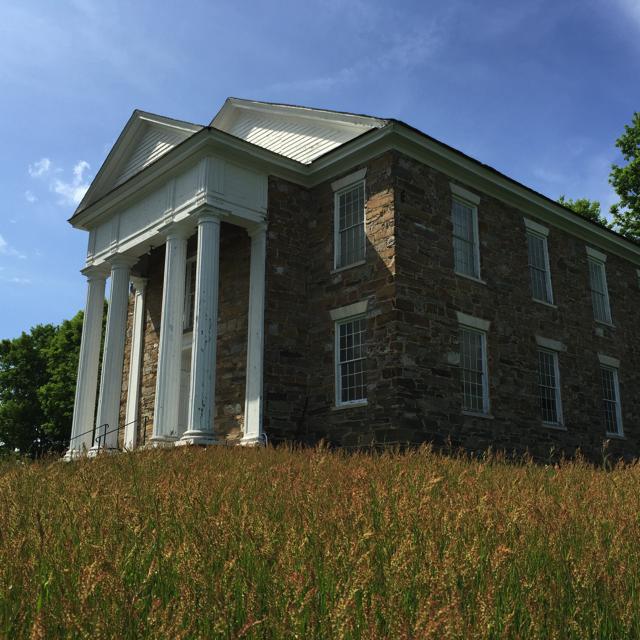 POULTNEY — The lively, impromptu piano duet played Wednesday evening in the old stone church on East Main Street in Poultney was just a glimpse of what the future may hold for the building.

Formerly the Fox Hill Center for the Arts, the building was donated to the Preservation Trust of Vermont by sisters Rita Fuchsberg and Irene Minkoff.

“It keeps the dream alive,” Minkoff said. “It’s a different road, but it leads somewhere similar so that’s good.”

Representatives from the Preservation Trust of Vermont and Stone Valley Arts gathered with the sisters at the building to sign papers finalizing the donation.

“This is a great gift,” said Paul Bruhn, executive director of the trust. He said the Trust will be a transitional owner and work with the arts organization it wants to take over the building.

“Our hope and idea is that Stone Valley Arts will be given some time to really plan and think about if it’s a project they want to take on,” Bruhn said.

The nonprofit arts group began in 2013 and was housed on the third floor of the Journal Press building until early November.

“This is just the most wonderful gift. It’s a momentous occasion for Poultney,” said Erika Schmidt, Stone Valley Arts board president. “Even though it is a young organization, it’s small but it is mighty.”

The first floor of the building offers a large hall with wood floors and a full kitchen. In the upper level, a large window looks out onto the high school.

Walking through the two-story building, Schmidt spoke about the wealth of artists in the area.
“The possibilities are immense,” she said envisioning concerts, gallery shows, art classes and receptions in the space.

“I felt a little like I was holding my breath,” Schmidt said. “I have to pinch myself. Is this real?”

The stone building, constructed in 1820, originally housed a church before it was turned into a Masonic Temple.

Minkoff told the nearly two dozen people gathered for Wednesday’s event that the sisters, along with Michael Castagnaro, Minkoff’s late husband, each had ideas of what the building could be when they bought it in 2007.

Minkoff said her husband saw it with a craftsman’s eye, Fuchsberg saw potential for a gallery and she herself saw it as a safe haven for at-risk school children.

Fox Hill, which is what “Fuchsberg” means in German, hosted a variety of events including a reading of “A Christmas Carol” by Charles Dickens, an exhibit with works by Ruth Hamilton and Marc Awodey and a mask exhibit.

She said she had just retired and was planning to come to Poultney from New York City frequently to work at the center.

“Then Michael died, and I wasn’t able to do it any more,” she said.
Fuchsberg stayed in Poultney and hired two employees to work at Fox Hill. She said it was hard to pinpoint when exactly it became too much.

“I basically stopped painting,” she said Thursday. “I had to put my own life aside.”

The morning after the donation Wednesday night was made official, Fuchsberg said she woke up feeling different, happy.

The sisters had received offers to purchase the building but said it had such a prominence in town that it should remain a public space.