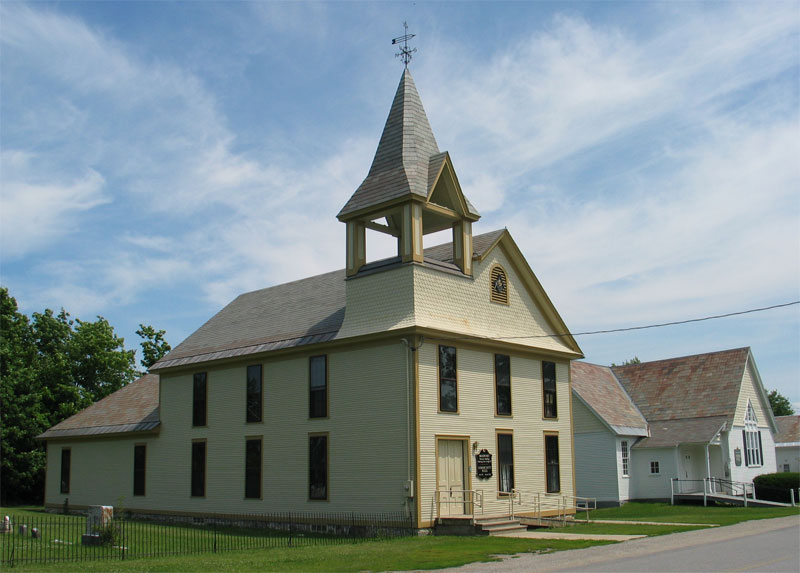 (This is for the lady from the historical society somewhere in northern Vermont who wanted some ideas on how to raise money.)

First of all, you need a project that has a wide spread appeal, something that needs help. You probably already have that piece.

From there I will tell you how our group got going. For our very first meeting we let the word get around that we were interested in fixing up a certain old building in town as a community project. The meeting was actually the first organizational meeting for the town Bicentennial Committee for the Vermont Bi.

We tried to contact every group in town, from the girl Scouts to the senior citizens and ask that a representative from each group meet with us. Some were interested in just the bicentennial celebration, some in building.

I don’t know why, but as it turns out most of our best workers are in the age group between 40 and 50, although we some outstanding senior citizens as well. We got enthusiastic response from most of the community, although we are not without a few who oppose the project and let us know it at every opportunity, I guess that makes the good comments even more delicious.

We have among our workers:

If you’ll allow me to call those people the brains of this outfit, we also have an army of workers who are willing to follow instructions and complete assignments, everything from soliciting food for a pancake breakfast to scraping the paint off from the second story clapboards. There are two categories of workers, and a lot of overlap between the two. One is the group who does the fund raising, we call them the Finance Committee. The other group is called the Building Committee, they do the actual work on the building, anything that can be done by volunteers. There are about 20 people involved on a regular basis.

We can usually get a near-by Soda Fountain to either donate the ice cream or sell it to us at a discount price. We set up do-it-yourself sundae or banana split counter and charge according to which the customers want. We solicit the home-made fudge sauce, the bananas, the nuts, etc. This one is very popular, but not our biggest money-maker. We can net $200-$300.

We purchase and picked the berries and solicited the rest of the food. We served a salad and baked bean supper with strawberry shortcake for dessert. Timing is crucial, you have to plan early enough to get advertising out in the papers and you still have to predict exactly when the berries will be available. Net $500.

Out best fund raiser. We hold these out doors under a tent, so the weather plays a big part in our success. We purchase the pancake mix, our favorite is New Hope Mills Buttermilk Pancake Mix which we buy in bulk from the Eastern mils Producers Trailer Truck. We borrow a tent, two grills, one to cook the pancakes, one to cook the bacon, we use the fire station for electrical outlets and water, it also has been used when the weather turned too cold to hold the breakfast out doors. We charge $4 for adults and $3 for children. We net between $500-$700 for each breakfast.

A good fall project. We rent space to crafters at $10 per table. We supply the tables. This runs on one day – a Saturday. We usually operate a raffle the same day, serve lunch and sell our logo T-shirts. We rented 25 spaces last year. Net $950.

Dinner/dance with old time music and square dancing. Like I said earlier most of our group is over 40, no ear-splitting music, just some fun. Not a big money maker. $500.

We served meatloaf, etc. and I guess some people thought it might really be ground hog. This one wasn’t too popular and we probably won’t do it again. Net $500.

We asked for yard sale items from all over town, set up a tent on the main highway, and sold at cheap prices for 3 days. Net $900.

Hired a professional to roast the pig, served with corn on the cob, tossed salad, potatoes salad and rolls with Ice Cream sundaes for dessert. Delicious. A new idea to may and we charged $10 per person so some were put off by the price. I believe we would charge the same again, however, because now the word is out about how good it is. Net $750.

We have received most of our money from donations. When we started out, one of the first things we did was to make estimates and create a brochure, explaining our purpose and the cost of each part. We mailed that out to every landowner in town and to others who we knew might be sympathetic to our cause. The response was overwhelming, ranging from a person twilling to give us $2000 up front to some who pledged $10 per month for a year and everything in between.

The fundraising campaign however, would not work without all the small fund raisers going on. We try to have something every month. That lets the commun8ty know that this is not just a passing fancy and keeps the project on their minds. Some who gave an initial donation of $100 have come back with another in our second year. We also send out periodic newsletters explaining the progress on the building and listing if we publish it, because people look forward to our projects.

We have put a lot of work into this and there are times when the Finance Committee feels a lot of pressure, trying to run a fund raiser every month. As soon as you finish one, it’s time to start advertising for the next. Soliciting donations every month is also an unnerving experience. You know that sometime you are going to call the wrong number and really get chewed out. The thing that keeps them going is the enjoyment of working together. As a matter of fact, one topic that keeps coming up is “What are we going to do when we finish this project?”

The two churches in town have allowed us to use their halls free of charge, the town has done the same for us with the fire station. The donations of time from other people directly to repairs on the hall are overwhelming. All labor donated by the contractor who laid the drain tile, all labor donated to recreate the front doors, all labor donated by an electrician! The local suppliers have sold us paint at cost and donated an electrical control panel and wiring. Every time we put on a dinner the local grocer sells us meat at his cost.

There is no way to make people like a project or contribute to it if they are against it. We have had some opposition, but in general much more support. For a rural/agricultural community of 1100 to make such contributions in hard economic times is indeed heartening.