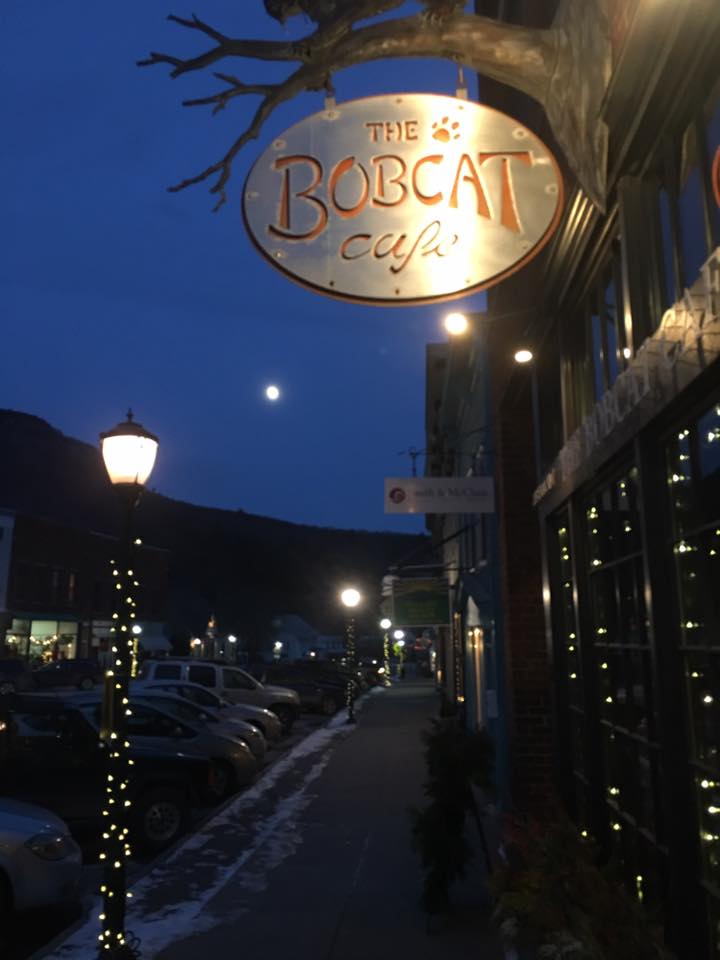 By CAROLYN WILSEY, reprinted with permission from the Addison Independent, October 21, 2002

It’s been six months and The Bobcat Cafe in Bristol is going strong and meeting its mission to provide a gathering place for people from the area, according to owner Robert Fuller.

Fuller decided to create the restaurant after talking with community members who felt that an English-style neighborhood pub would be just the thing to draw Bristolites together.

So far, it seems that plan is working. Fuller, who also owns Leunig’s Bistro in Burlington, Pauline’s in South Burlington and is a partner at Cubber’s Restaurant in Bristol and Gillian’s in Shelburne, wanted to find a minimum of 12 financial supporters before he delved into the project to make sure that this venture was something that people really wanted — after all, Fuller had plenty on his plate already.

Since his initial sales pitch to about 22 locals, 32 have come forth to form The Bobcat Cafe’s financial backbone.

Fuller said that the sponsors also act as marketing and focus groups who are willing to give honest feedback about all aspects of the restaurant.

Each contributes $5,000 and, in turn, gets 25 percent off dinners for themselves and a friend. In five years, Fuller will pay the sponsors back in full, plus interest.

“Things are really great,” said Fuller. “The response from the community has been overwhelming.”

“We were trying to build a place that was new but looked old,” he said.

Jim Sanford was the architect and Gary Rutherford the builder. Before long, the place was outfitted with old wainscoting, pictures of Bobcats and unique wood frames with holes where maple taps had previously been.

A 100-year-old bar from New York state completed Fuller’s vision for the pub.

Fuller said that the entire process was a true collaborative effort. The restaurant opened on April 3.

With business rolling along, Fuller and Paul Saylor of the Catamount Brewing Company are looking to add new items to the menu — Bristol-brewed ales and lagers.

“Somewhere along the line the idea of brewing beer came into the picture,” Fuller said.

Test brewing is currently under way at the pub, and Fuller expects to have some homemade varieties on tap by the end of November.

While they are focusing on some classic German styles of beer, Fuller said that the different brews will bear local names — “Deerleap Lager” and “River Runner’s Red Ale” are some tentative ideas.

Part of Fuller’s beer brewing concept is being as ecologically responsible as possible. The 350 pounds of spent grain that will result from brewing a batch of beer, which is 20 kegs or 310 gallons, will be sent to the LaPlatte River Angus farm in Shelburne. This is the farm that supplies The Bobcat Cafe with its naturally-raised beef, said Fuller.

Yeast water, which cannot go into the septic system, will be added to compost heaps.

“Brewers on a larger scale have a harder time dealing with these issues,” he said.

Feedback from a questionnaire that was sent out to sponsors a few weeks ago, revealed that people like the cozy atmosphere of the pub and prefer not to have that interrupted by live music.

“Most people don’t want to see entertainment,” he said.

As for the menu, a couple of items are changed on a bi-weekly basis. As much as possible, Fuller said that he likes to use local ingredients and has been committed to this for a long time — right now wild mushrooms are prevalent so expect to see them on upcoming menus.