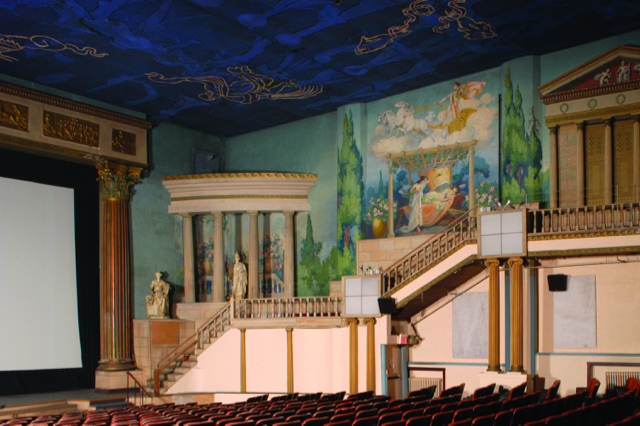 The acquistion phase of the Latchis Complex in downtown Brattleboro is now complete. It was a complex three-year process which involved many adjustments in the original plan, and even Planet Mercury played a role in the final steps.

How it Happened, the First Steps

Fifteen years ago, the Latchis complex in downtown Brattleboro was in derelict condition. That was when Spero Latchis returned to rescue the property that had been built in the 1930s as a tribute to his grandfather. Ever since, Spero and his wife Elizabeth have spent their lives rehabilitating the Art Deco site room by room and piece of furniture by piece of furniture…they have been great stewards. The day-in and day-out work of improving the property and operating it had taken a toll, and in 2000 they decided to sell the property which includes:

The Latchis is one of Vermont’s great architectural treasures. It was completed in 1938 as a tribute to Demetrius P. Latchis, a Greek immigrant who started selling fruit from a cart and built a business that included three hotels and 15 movie theaters. The Latchis was the gem…Greek murals, statues of Greek gods and goddesses adorn the theater and public spaces, complete with exquisite terrazzo floors throughout.

After learning of Spero and Elizabeth’s plan, the Preservation Trust began the process of looking for a local organization interested in preserving this irreplaceable part of Brattleboro. The Brattleboro Arts Initiative, with a mission to develop and promote high-quality venues for the presentation and education of the visual and performing arts, saw this as a once-in-a-lifetime opportunity for an arts facility in southeastern Vermont. It is also an opportunity to play a key role in the effort to revitalize downtown Brattleboro…a community that has had some major challenges over the most recent past. The Book Press with its 300 manufacturing jobs closed last year, Vermont National Bank was taken over by the Chittenden and many top management jobs were lost, a Wal-Mart located across the Connecticut River has had a negative impact on downtown retailing, and a mortgage processing center was moved to Maine. Despite these and other challenges, the community understood that the Latchis could be the key to a better future, and the Brattleboro Arts Initiative leaped at the opportunity.

In partnership, BAI and the Preservation Trust then began the process of raising $1.4 million for the acquisition plus the funds necessary for project management, interest costs, fundraising, and an operating reserve. In the best of economic times it would have been a near Herculean task, but the good economic times disappeared- making the task even more challenging.

BAI concentrated their efforts on local sources.individuals, businesses, and foundations interested in the Brattleboro area. Together, BAI and the Preservation worked on developing state support. And finally, the Preservation Trust sought out support from foundations and lenders.

Over $1.3 was ultimately raised as a result of great generosity on the part of many. An additional $550,000 was provided by a variety of lenders committed to downtown Brattleboro and the arts. Because of the complex nature of the acquistion and multiple lenders, closing was complicated. The fact that Mercury was in retrograde (a concern of the owners) at the time of the original closing date, meant that the acquisition wasn’t completed until mid-March!

Next Steps, Operations and Rehabilitation

With the acquisition complete, BAI (and its subsidiary the Latchis Corporation) are now tackling the challenges of day-today operations. A General Manager has been hired to oversee the hotel operations, movie business, and property rentals, as well as coordinate the BAI’s arts programming needs.

Of particular import, BAI has established a Building Committee to advise them on developing a plan for rehabilitating the Complex. The Committee includes representation from the community as well as from the Preservation Trust. The first step will be developing a plan for $300,000 of federal funding which was obtained for the project by Senator Patrick Leahy.

Over time, BAI plans to develop the complex to provide expanded live performance as well as space for the visual arts and arts education activity. As “the Latchis” metamorphoses into “the Latchis Center for the Visual and Performing Arts,” the history, identity and heritage of this cultural cornerstone will remain intact, while a new artistic energy will emerge. Just as the original Latchis reflected the arts and culture of its times, so the new Center will stand, in Shakespeare’s words, as a “mirror held up to nature,” reflecting back to us a contemporary vision of our modern times.